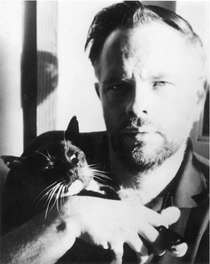 Everything began in Chicago, on the 16th of December, 1928. Philip Kindred and Jane Kindred Dick cried and wept for the first time in their lives. Jane died after 41 days, because of the carelessness of their mother, Dorothy Grant Kindred (who didn't take her to the hospital at the proper time, a money matter). Since then, Phil had a unconscious culpability complex and we can understand perhaps a bit more why he felt anger toward his parents. Moreover, Jane would be found in many phildickian writings later on. Phil's dad, Joseph Edgar Dick, had a nice job indeed: cutting the throats of pigs as an employee of the government. His mother censored official texts of the government's spokesmen. Here again, what feelings went through the young Dick about his parents? Censorship is one of the most important features in Philip K. Dick's writings: distinguishing truth from falsehood, the real from the imagined.

1930 was the year of his departure for Berkeley, CA. In 1932, his parents divorced and three years later he and his mother moved to Washington, DC. 1938: back to Berkeley. In '40, '42 and '43 they moved around in Berkeley. Phil let his friends call him Jim Dick. He entered Hillside School in northern Berkeley. There, his originality made him very popular. His relationship with his mother was very distant, almost cold. Phil wrote some small poems, and other short texts. Already at 13 years old, he was a reader of Astounding and Unknown, published at this time by the well-known John W. Campbell. In these periodicals, he read Asimov and Heinlein, for
instance; without forgetting Van Vogt, whose influence on Dick is certain (take a look at 'Solar Lottery'). At 14, he wrote his first novel (lost, alas!) called 'Return to Liliput' (strongly influenced by Swift). 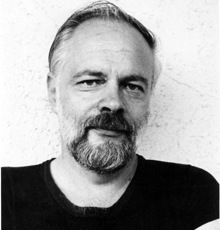 Around 1944-46, he underwent intensive psychiatric treatment against agoraphobia and some other psychological troubles. He entered Berkeley High School in 1944. At 18, he left his mother's flat, where he had been living since his parents' divorce. He moved to a flat shared with artists and homosexual poets; doing so was probably only to show his mother he could manage himself alone, since homosexuality didn't attract him. Besides, he quickly moved out to a small attic apartment, of course still in Berkeley. At this time he suffered tachycardia. He quickly became dependent on the medicines he's prescribed.

In 1947, he received a diploma for finishing high school, and worked in a TV sales and repair shop (they also sold records). Music would remain his great passion: it would stay omnipresent throughout his works. In September 1949, after having moved to a real flat (not just a small attic), he registered at the University of California in Berkeley and studied German and philosophy. During May 1948, Dick married Jeanette Marlin, divorcing at once, six months later; he never saw her again. He met his
second wife, Kleo Apostolides, a student at Berkeley, in 1949 and married her in June 1950. Kleo was three years younger than Phil, so she was 19. The house they moved into was full of mice, which explained the large number of cats that could be found at this period at 1126 Francisco st. in Berkeley.

Concerning Dick's reading, he admired various authors, as different as H. P. Lovecraft and Fredrik Brown, and read still and always a lot of Van Vogt. At 24, he began his literary career without an agent; that is, he was trying to put out his short stories with as much success as possible via US mail. His health was growing better.

At the end of 1951, he gave his resignation to the record shop. In June 1952, a certain fellow named Scott Meredith in New York agreed to be his literary agent. 1952 was the time of discoveries like Herbert, Sheckley, Farmer, Aldiss, Silverberg, Vonnegut and many others. In 1954, as Dick finished the manuscript of his first published novel, SOLAR LOTTERY, he and his wife met Poul and Karen Anderson; they stayed good friends. Let's specify that money is a rare thing at the Dicks' of the fifties. An interesting story follows: at this period, the Dicks were contacted by FBI agents, who wanted them to go and study in Mexico and be their informants there. Because of ethics, they refused.

Between 1951 and 58, our author wrote and sold about eighty short stories! In 1954, Dick met Van Vogt at the SF WorldCon in San Francisco. Between 1950 and 1960, he wrote eleven novels of pure fiction, but didn't sell any of them, as you know. Having sold in 1955 SOLAR LOTTERY to Ace Books, a firm that had been printing paperbacks for two years, he managed to write four novels in 1954 and 1955. We underlined Van Vogt's influence, but there also is Vonnegut with his PLAYER PIANO (1952).

Nearing their thirties, Dick and his wife Kleo left Berkeley for Point Reyes in Marin County, CA. Marin County appears in many mainstream phildickian novels. There, he met Anne Williams Rubinstein, born 1927 in St Louis. Five months after their move to Point Reyes, in 1958, Phil and Kleo divorced; he married Anne almost immediately thereafter. Anne already had three children. Beginning with 1959, Dick let his beard grow. On February 25th, 1960, Dick became father of a girl named Laura Archer (Archer is also a very present name in his work). It was reported that the first thing he said after the birth was more or less: "And this is for Jane!". When, in the fifties, Dick wrote his dozen of mainstream novels, it was probably to locate himself in this mainstream literary genre, very 'en vogue' in this period. None were sold and they were returned to him in 1963. Only in 1975, a small editor published CONFESSIONS OF A CRAP ARTIST.

With the beginning of the sixties, he suffered worse and worse breakdowns; the cause of this was the amphetamines that allowed him to hold the speed of sixty pages per day; this was the speed he needed not to starve. He received the Hugo Award (in remembrance of Hugo Gernsback of the AMAZING's beginning) in 1963 for THE MAN IN THE HIGH CASTLE. Starting late 1962, the third marriage began to fail, to really collapse in 1964. The same year, he met Nancy Hackett, 21, fragile and who had just recovered from a nervous breakdown. They moved to San Raphael and were married in 1966. A girl, Isa (abreviation of Isolde), was given to them in 1967, before they moved to Santa Venetia.

Dick's need for amphetamines didn't decline, nor did his long breakdowns. After a stay at the hospital because of a case of pancreatitis that almost cost Dick his life, Nancy left him taking Isa with her in 1970. That was the really dark period in Dick's life; he was in profound despair. Dick filled his empty house in Santa Venetia with junkies. Nevertheless, he fell in love with a young DARK-HAIRED GIRL named Kathy Demuelle.

The 17th of November, 1971, somebody broke into his house. He was convinced it was the CIA. This troubling event starts a paranoia in Dick's mind, for nothing of value has been taken away, just perishable food; it appears to have been more a military operation than a simple burglary, not to mention that his safe was opened with explosives!

Around this period (1972), he met K. W. Jeter and Tim Powers at Cal-State in Fullerton; they attended a lecture by a writing professor named John Schwarz.

The next year, he got many threatening phone calls. He sheltered in Canada without Kathy. There, he gave his famous lecture, THE ANDROID AND THE HUMAN, in Vancouver, first at the University of British Columbia and a day or two later as his Guest of Honor speech at the second annual Vancouver Science Fiction Convention; and met another DARK-HAIRED GIRL named Jamis. Back in California, he stayed in Fullerton where he met first Linda, and then Tessa Busby, whom he married on April 18th, 1973. A son, Christopher, grew of this union the same year. In 1975, he was awarded the John W. Campbell Memorial Award for FLOW MY TEARS, THE POLICEMAN SAID.

At this time, Dick had one of his mystical experiences that explain the almost divine nature of his last novels. His last lecture took place in Metz (France) in 1977. He died in 1982 on a hospital bed, of heart failure, leaving a unfinished novel, THE OWL IN DAYLIGHT.

After these biographical elements, a short published-novel-bibliography may be useful:

There are more novels by Dick, but in most cases the manuscript of these novels has been lost:

There are a lot of books about Dick. I just put the books in English, whose reference I am sure are correct:

- "Cosmogony and Cosmology", Kerosina, 1987 (limited edition of 825 copies, 500 of them hardcover, boxed with Kerosina's edition of VALIS)
- "The Dark-Haired Girl", Ziesing, 1988
- "Selected Letters", Underwood-Miller, 1991 et sq
- "In Pursuit of Valis - Selections from the Exegesis", ed. by L. Sutin, Underwood-Miller, 1991
- plus various essays published in the PKDS Newsletter.